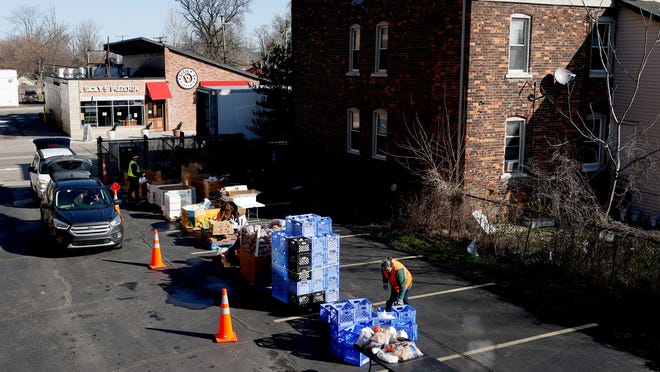 On a Thursday morning, a long line of cars, stretching down Vernor Highway and West Grand Boulevard, headed for a drive-thru in Southwest Detroit, where people picked up the basics — milk, chicken and an assortment of vegetables.

Among them, Bianca Martinez, a 35-year-old mom of three, who came to the event, put together by Southwest Solutions and Gleaners Community Food Bank, for the second time since last fall.

Items at the grocery store are pricey, she said. So, too, is gasoline. Martinez — who left her temporary warehouse job for maternity leave earlier this year and has since been unemployed and looking for new work — feels she has to be strategic about where she drives and how often. There’s also the baby formula shortage she has to think about.

“A lot of people out here are struggling, they’re living check-to-check,” said Martinez, of Ecorse.

The extra boost Thursday is a “blessing” so much so that she wants to come back and help out. Times are tough now but with Easter right around the corner, it’s important to be able “to provide something for your family,” she said.

“That uptick is beyond the normal monthly ebbs and flows that we see from time to time,” said Stacy Averill, vice president of community giving at Gleaners. “We know that many families are struggling to make ends meet.”

Throughout the fall and winter, Gleaners served an average of 9,000 households a month at its mobile distribution sites across southeast Michigan. In March, that increased to 13,000.

Southwest Solutions had seen demand go down last fall across the two distribution sites — including the one Martinez visited — it has been running since the pandemic began. But recently, that need has picked back up.

Meanwhile, Forgotten Harvest is reporting longer lines at pantries, too.

Americans are feeling the squeeze as inflation continues to soar. It’s hitting gas, shelter and food. Prices rose 8.5% — the highest annual increase since 1981— according to the March Consumer Price Index. Grocery costs in general went up 10% year-over-year. And more specifically, prices for meats, poultry, fish, and eggs increased nearly 14% since last year.

“The pandemic has put strains on households and family budgets, and even a small increase in what they’re having to spend each month really can put a lot of strain on their household,” Averill said.

Last month, Gleaners’ partners agencies — soup kitchens, shelters, pantries — reported a 10% to 12% rise in the number of people they serve, she said. Since the costs in gas and food have gone up, Gleaners has also seen more families carpooling to sites.

In general, the organization has been distributing more food since 2019. That year, it disbursed 46 million pounds. In 2020, that rose to 64 million and last year, 71 million.

During the early days of the pandemic, Southwest Solutions served roughly 400 people, with cars lining up for a mile and half, said Steve Palackdharry, director of communications.

The need went down as the economy started to recover and pandemic-related safety nets were put in place, like federal pandemic relief legislation and increased food assistance benefits. The organization would serve anywhere from 200 to 250 people, Palackdharry said. Since December, that’s creeped up to 300 families.

“I would attribute the uptick that we’re seeing to inflationary increases in food, in housing, in utilities, in gas,” Palackdharry said.

The Detroit-based nonprofit, expecting the need to continue, has extended its partnership with Gleaners through September and may even continue beyond that.

“We’re generally serving low-income families who need food to supplement the assistance they received, people who have lost their jobs, people on fixed income, including seniors and those with disabilities and people not eligible for government assistance for various reasons, so the food distribution has become an essential for these households to alleviate hunger,” Palackdharry said.

Organizations themselves are dealing with less supply and rising operating costs.

“We have less food flowing to us than what we had in the past and the only way that the food banks can try to negate that … is to raise more money to buy more food,” said Phil Knight, executive director for the Food Bank Council of Michigan.

The price of gas for vehicles, the boxes for food, shrink wrap, and even tape have all gone up, said Frank Kubik, food program director for Focus: HOPE. The organization, which provides food for low-income seniors, has had to absorb those costs at the end of the day.

“There are no excuses to not do your job. And so whether it was the pandemic, whether it’s rising costs, there’s no excuses, you just do your job and get the food out to the seniors,” he said.

Forgotten Harvest also is noticing more people coming to its food pantries, said CEO Kirk Mayes. In February, the organization distributed food to about 3,700 more families than it did in January, so it’s trending up.

“Families are struggling a little bit more. We can see it in our lines,” Mayes said.

That’s the case for United Community Family Services as well.

Last Friday, cars were already lined up about an hour before food distribution was set to begin, Kristin Olmedo, president and CEO of the Troy-based nonprofit, observed.

The organization, which primarily serves refugee and immigrant families in metro Detroit, has reported an “all time high” in the number of families they are serving at its food pantry.

The uptick started in January when 255 families came to the food pantry, compared with 196 families the same time last year. Each month since then, the number of households has grown steadily.

Capuchin Soup Kitchen is welcoming more people who haven’t been to its facility before, said Fred Cabras, director of social services. He said there has been a “larger surge” of households at the food pantry more recently. This comes amid a drastic dip in the number of people the organization served throughout the pandemic.

Olmedo suspects the increase her organization is spotting is because of the end of the expanded child tax credit combined with higher gas and grocery prices. Families received monthly payments for six months through December that could have amounted to $1,500 or $1,800 per child, depending on a child’s age.

Families are feeling the pinch on needs beyond food.

“The problem is if you have to choose between putting gas in your car or buying diapers … it’s a hard choice for families to make right now,” she said.

The top calls received by the United Way for Southeastern Michigan’s 211 service — which connects people to basic resources — have been about utilities, housing, food and shelter, said Tamara Bolden, senior director of 211 operations.

While requests for food help have been consistent throughout the pandemic, calls for help with utility bills, rent and mortgage have gone up, Bolden said.

“That is an indicator to us that they’re making decisions around how they have to prioritize their spending in order to make it through the month,” she said.

Roslyn Bouier has seen an increase at the Brightmoor Connection Food Pantry, where residents can “shop” for items like rice, canned goods and meats, but she cautioned that food insecurity has always been a concern in Detroit.

High need hasn’t really wavered in a city where residents have already been struggling with affordable housing and facing evictions, Bouier said.

“Long before the pandemic — COVID-19 — there was a pandemic raging: food insecurity and water insecurity,” she said.

Knight said there are a number of factors spurring the increase in need organizations are witnessing. Among them: the end of the expanded monthly child tax credit, climbing prices due to inflation, the need for jobs at a living wage and food banks not getting as much supply from the United States Department of Agriculture as they once did, he said.

“Certain jobs are not paying enough to be able to support three children,” Martinez said, adding that she’s grateful she has the support of her mom and stepdad.

People have budgets and now those budgets have changed, she said.

“You have your moments where you break down and you feel like … ‘what am I going to do?'” Martinez said. “Your back’s up against the wall … but you just got to stay positive about it.”

For information about food assistance resources, call 2-1-1 or go to https://unitedwaysem.org/get-help/. Visit https://pantrynet.org/ to search for pantries.

Nushrat Rahman covers issues related to economic mobility for the Detroit Free Press and Bridge Detroit as a corps member with Report for America, an initiative of The GroundTruth Project. Make a tax-deductible contribution to support her work at bit.ly/freepRFA.

Thu Apr 21 , 2022
Many people’s reaction to this confusion is to refine the category of “healthy” until it’s full of foods essentially available only to people who live on a farm, as well as close to other farms, with the ability to spend every day prepping fresh farm-sourced food for themselves. They also […]