Burger King’s fries had almost no flavor, in my opinion, and the potato had a mealy texture, which earned them the bottom spot.

When I first took a bite of Burger King’s fries, I noticed their slightly crunchy exterior, which I consider a sign of freshness. But shortly after, I could feel the mealiness of the potato on my tongue. The fries didn’t mush down or ooze potato when I bit into them; instead, it was more of a clean break.

To me, the fries mostly tasted like unsalted butter rather than a flavorful oil.

They weren’t soggy at all and didn’t flop over when held in the air.

While I appreciated that the fries weren’t exceptionally soggy, I thought their stiffness was almost cardboard-like in texture and rendered these golden sticks less enjoyable than any of the others.

Shake Shack’s crinkle-cut fries were the thickest of the bunch. These tied with Burger King for last place.

I thought these fries were also mealy, and they were starchy enough to leave an unpleasant film around the inside of my mouth. Both of these components made these fries unpleasant to eat, in my opinion, and were factors that went into its tied-for-last-place ranking.

But the crunchiness on the outside paired with the ample amount of potato inside made these slightly more enjoyable than the fries from Burger King. The longer fries had more of that soft, potatoey center and stiff ends, while the shorter ones were completely stiff and didn’t flop over.

Unfortunately, though, these fries didn’t have enough flavor for me. Depending on what you prioritize when picking a “good” fry, Shake Shack’s and Burger King’s can be interchangeable in terms of being at the bottom of this list.

The crinkle cut helped these fries hold their shape.

I could tell that Shake Shack’s fries were softer than Burger King’s, but they were still a bit cardboard-like, in my opinion, which added to the bottom-placed ranking.

The fries, which were close to an inch thick, had a somewhat flaky exterior texture that left crumbs behind. If you like a smooth exterior, these may not be for you. But if you like a more textured fry, this is a positive feature.

Wendy’s fries were creamy inside but had a near-flavorless pepper taste, which is why they landed in third place.

The fries were piping hot when I first bit into them and retained their fresh temperature and taste for around 10 minutes, which was impressive.

They were salty and tasted like oil, which was the familiar fast-food flavor I was looking forward to, but they also had an unexpected pepper heat. It tasted more like white pepper than black pepper, but the spice took over with each bite rather than providing an additional flavor.

The fries were super soft inside and weren’t crispy on the outside.

After 10 minutes, though, the fries got hard and cardboard-like, lost their oil flavor, and just tasted like peppery heat. For this reason, I ranked these in third place.

The skin-on approach gives these a handmade aesthetic.

These fries were about 1/2-inch thick, had plenty of give to them, and the longer strings flopped over in the center when held up.

Wendy’s also keeps the potato skin on its fries, which gives them a homemade look.

Although they were enjoyable when fresh, the change in texture and flavor change that happened when the fries turned from hot to cold was what landed these in third place for me.

Popeyes’ fries had tons of flavor and texture, and were a solid runner-up in this ranking.

The chain known for its chicken has proved itself in the fry category, in my opinion. They taste unmistakably like Popeyes and feature a coating of Cajun seasoning that you can see easily.

A flaky fry made for a crunchy first bite, but they soon got limp and soggy.

Even when soggy, though, the fries held onto their flavor and the potato interior stayed soft and creamy in texture.

If they hadn’t gotten so soggy-feeling on the outside once they cooled down, these would have been an even more impressive take on fast-food fries.

These fries also had some skin on them, which complemented the flakiness.

The crispy, wispy bits you can see on the exterior added some crunch before getting soggy. The strings of fried potato, which were around 1/3-inch thick, were creamy and seemed to be seasoned from the inside out.

If not for the quick turn from crispy to cold, these fries may have ranked above McDonald’s. But the flavor and peak texture earned it the place of runner-up.

The McDonald’s shoestring fries kept their texture and flavor for the longest amount of time out of the fries I tried for this ranking.

They were slightly crispy on the outside, had a lot of give when I took a bite, and tasted both salty and oily.

In my opinion, the longevity of these potatoes is what pushed them over the edge as the winner.

McDonald’s hit the mark on almost every component, which landed these fries the No. 1 spot.

At around 1/4-inch thick, these were the skinniest fries of the trial. Therefore, they had less of a potato ooze than thicker fries, like the ones from Wendy’s and Popeyes.

These fries didn’t get stale as quickly as the other contenders.

Similar to Wendy’s and Shake Shack, the longer fries were more likely to flop than the shorter ones, but this was inconsistent as some long fries were able to hold their own.

What catapulted these fries to first place was the fact that the only thing I noticed change as they sat out was the temperature.

Thu Aug 26 , 2021
FLORHAM PARK — New York Jets wide receiver Denzel Mims is healthy this training camp, a year after a series of injuries robbed him of the early part of his rookie season. But in year two, he’s still had to overcome physical adversity. Not because of something that happened on […] 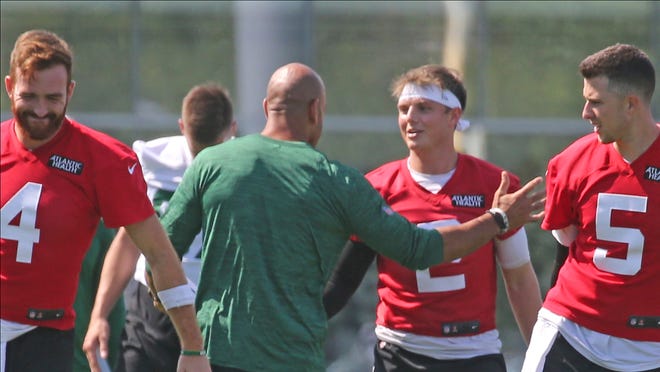