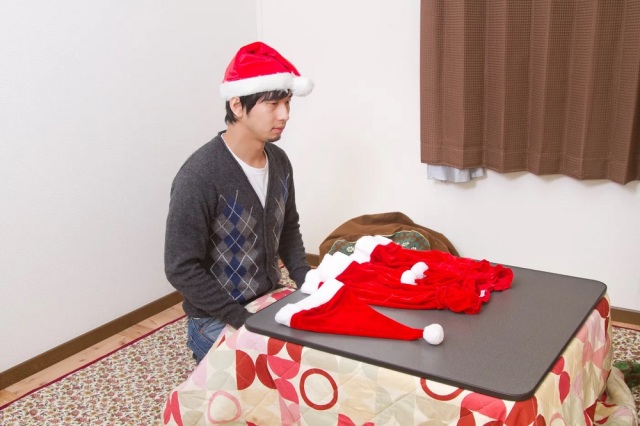 You can treat your Christmas blues by treating yourself to some comfort food at a discounted price.

In Japan, Christmas is the most romantic time of the year. Sure, Japan celebrates Valentine’s Day too, but that’s more a day for initial confessions of love (and an excuse to eat chocolate). Christmas, though, especially Christmas Eve, is when established couples in Japan spend the night snuggling and whispering sweet nothings to one another as their passion easily wards off the winter chill.

But what about people who haven’t found their soul mate? They face the prospect of Kuribocchi, or a “lonely Christmas” (from Kurisumasu, the Japanese pronunciation of “Christmas,” and bocchi, “depressingly alone”). But while the bocchi part of Kuribocchi has a sad ring to it, fast food chain Lotteria is looking to ease the pain with a special Kuribocchi meal set.

Called the Kuribocchiken, or Lonely Christmas Chicken, Pack, the special combo contains arguably the best salve for emotional suffering: lots of fried chicken. That’s not just because it’s an undeniable comfort food, but also because fried chicken has been the standard Christmas Eve dinner in Japan for decades.

The Lonely Christmas Chicken Pack gives you three pieces of karaage Japanese-style fried chicken. These are lightly fried, with a pleasantly mild crispness and sweet saltiness from their soy sauce-based marinade.

You also get one larger piece of Western-style fried chicken. This has a more pronounced crunch, but the meat is still tender and juicy, and here the seasoning is a Cajun spice blend.

Rounding out the set are a soft drink (so you’ll have something to drink other then your tears of loneliness) and a side of French fries (because when was the last time anyone was sad about getting a side of fries?)

The food all comes served in a bucket that you can hold in the palm of your hands. Yes, you could call it “single-sized” if you wanted to double down on the loneliness of the Lonely Christmas Chicken Pack, but we prefer to think of it as “cute-sized.”

Lotteria is offering a coupon through its website here for the Lonely Christmas Chicken Pack that knocks its price down to just 500 yen (US$4.35). But what’s arguably even more thoughtful than the discount is that by showing the coupon on your smartphone, you can order the Lonely Christmas Chicken Pack without actually having to request it out loud, just in case you feel self-conscious verbally declaring that you’ll be dateless on Christmas.

However, there’s no actual requirement that you be spending the holidays alone in order to order the Lonely Christmas Chicken Pack. Lotteria says that customers who come in with friends are welcome to order it too, and each individual customer can order up to three packs, meaning you can pick some up for your significant other or friends if you’re having a platonic party for Christmas too.

The Lonely Christmas Chicken Pack is being offered between now and December 26, just in case you’re still dealing with any lingering loneliness two days after Christmas Eve. And if you’re still feeling lonely after that, don’t forget that even the guy who spent his Christmas like this…

…eventually had things turn out OK for him.

Wed Dec 22 , 2021
Want to know what’s hot? There’s no better place to go than Google Trends, which tracks the most common Google searches. Every year, they release a Year in Search report that highlights the top searches by category. Here are the top 10 food-related searches worldwide for 2021. 1. Birria tacos […]